skip to main | skip to sidebar

It's been forever since the last post (month + 1/2) and quite a bit has happened. I've restrained myself from writing because I want everyone to vote for 2010. And you DID! Awesome job! All 4 of you should pat yourselves on the back. You know who you are. : ]

I did the same video thing as last year. 'Cept this year I'm wearing a different tee-shirt. Yeah, I'm fatter too.

I hope every things been peachy for you since February. I'm doing ok, same old story. I did join a gym a couple of weeks ago and I'm going like 3 times a week. Funny thing is, it's not bad as I thought it was going to be. No one bothers me or asks me to join a cult. No weird looks from women (like the kind I get at the mall). I do have a minor set back though. When I'm on that gerbil bike peddling my ass off my feet go numb about 15-20 minutes into the ride.

Maybe I need to diet too.

Apart from that I've been totally hooked on deadmau5 and a few bands that have rolled out. Cage the Elephant, Mumford & Sons and Florence and the Machine have really caught my attention. Really good talent in all those bands and when I get in my Ferrari I sometimes find myself yelling out the lyrics. It does the soul good.

Oh well. We can all still look up to the rich and dream. We can still hold onto our aspirations and illusions of grandeur. We can all hope with the best of our hearts that someday, some how and somewhere Charlie Sean will walk through the door and take us away to the Caribbean.

Cocaine and hookers all around!

Here is the link to the LTNB awards presentation (somewhat disappointing)
Posted by Graham at 7:02 PM No comments: Links to this post

I'm somewhat pleased and indifferent to announce the LTNB nominations for 2010. Last year I didn't post about it and left it in the upper right hand corner where it was ignored like a salad at McDonalds. It turns out that in 2010 there weren't as many bad things as 2009. I'm really happy about that. Actually there are only a few options for 2010 which is a turn for the good in my opinion.

1. Sarah Palin's Alaska.
Ok, I actually didn't watch this so I'm totally unqualified to make any judgement. However, qualification has never stopped me in this blog. The show was humorously horrible. From the 2 minute clip I saw of her on a damn boat fishing next to bears, I kept praying that she'd get attacked. I don't want anything bad to happen to her but I think it'd be more entertaining to see a bear win for once.

No offense to any Chicago teams.

2. Any tablet sold that wasn't an iPad.
What I'm getting at here is all the tablets that tried to make it. It seems that Apple will stay on top regardless of Steve Job's health issues. I wish Steve the best, sincerely. Apple's iPhone dominates the phone market. The App store is a whole new market. The iPad is just beautiful and I don't know what they'll come out with next. It's sad to see competitors suck at trying to keep up with them.

3. The Oil Spill
I stayed off this subject in the posts and I didn't want to get too involved because it was all I heard about for months and thought you had heard enough also. Doesn't really need any more explaining.

4. Secrecy
Wow. I didn't think this could happen. All it took was a few soldiers though. No, not just the one that is in jail. If you know how it works, you know that there is a guard that checks for electronics and other items when entering/exiting secret compartment facilities. So the blame doesn't just fall on one persons shoulders. You have to blame Julian Esange too but he's not American and he doesn't see things the way we do.


So there you have it. Which one is the worst? I'll give my vote/opinon on April Fool's Day along with a video if I'm not too lazy. Last year the award went to Healthcare reform. Who will win this year? Who knows? It's up to you so vote and vote hard.

Posted by Graham at 8:09 PM No comments: Links to this post

I was going to post something on facebook but then I had that deep thought again. "Why?" What's the point but to filth' up the innernet (trademarked). I'm sorry for the pessimist post but I have to have a channel. Some channel other than fakebook or, well, myspace is dead. I heard it died. I'm not really sure but I'm not going to go have a look or anything. There might be a funeral or something.

There was a point though, back in the day, that I gave up on myspace too. I'm seriously (tricky, using that word in this blog) considering dropping facebook. It ticks everyone off. Everyone off but me. And I'm not trying to be selfish, it's just that I spend too much time on that damn site when I could be goofing off with wired.com or watching TV. America is great.

Did you watch the State o' the Union address? I'm proud that I made it all the way till 10:15. Good on me! Good all over me with ice cream and crushed pecans! Good on me and some of that dirty chocolate syrup.

Now that you feel as though your ears have been violated, I'd like to change the subject:

Ok, sorry I changed the subject to the wrong thing. Oh, I know, we can talk about excuses. I have an excuse for not writing in so long. I know! It's been like, forever. I'm screwing with you. I don't use the word "like" in speech. I have some peoples that use it though. It's funny listening to them talk. I could have them over and mute the Bravo Channel and it would be the same effect. There isn't anything worth watching though. I sorta gave up on V. What a bust. Really kind of stupid to be honest and I feel retarded admitting that I watched it.

Wipeout is cool though. Love Wipeout. Won't change my mind about that.

Oh, yeah, my excuse that I mentioned in the paragraph above. Um, let's see; I wasn't able to type out my messages because a wizard had to use my eyes to see in the future. It wasn't painful or anything and the spell was really trippy. He gave me vicaden to help with the upset stomach. So, yeah. I'm blaming wizardry. Seems fair.

The Falcons lost hard in the playoffs this year. It was hard to watch. I actually left a friends house that night because I couldn't watch the rest of the game. Sad. But overall they did really good compared to the train wreck of a season they had last year. Go Falcons.

Oh yeah, I forgot to mention that the tee shirt shop is closed. I don't think I want to re-open it unless a crazy old lady riding a unicorn tells me otherwise. Have a great weekend!
Posted by Graham at 4:53 PM No comments: Links to this post

I read a Knock at Midnight last year. It is a book that you struggle with. It's not easy to read but if you can finish it, you'll be a better person for it.


This, of course, is not Nonsense but I heavily believe it's a good thing to post.
Posted by Graham at 6:32 AM No comments: Links to this post

I'm on the slowest computer available right now. Page down loads are about two days in time to display. I'm getting my car washed and waxed and I think the computer might be oppressed by the man. I'm not totally sure. The whole experience is very unsettling.

Almost as unsettling as watching the car in front of you drive right off a curve into an embankment at full speed. I have no idea what was wrong with the dude or if he had fallen asleep or what. Just totally bizare. Almost as bizare as the stupid birds falling out of the sky because of the fireworks. Actually I don't care about that. I mean I do. But really, I don't. In a way I sort of care. But not really.

Ok, since I only have 2 more minutes on this clunker I'll leave you with this link to Atlanta's newspaper. It's real. This person is an idiot. Furthormore, my wife's boss was having an afair with him. Cool huh?

http://www.ajc.com/news/cherokee/cherokee-schools-spokesmans-job-797240.html
Posted by Graham at 7:20 AM No comments: Links to this post

It's only Wednesday and I'm ready for Friday. It's 5 am and I'll be getting ready for work soon but I wanted to jump online to say I'll be out this Saturday. Anyone interested in seeing TRON with me, email me at:

Again, I'm in Atlanta, so if you're in Juno, this isn't going to work. It's going to be a late night showing too so anyone that's interested: email me.

Enjoy your Wednesday!
Posted by Graham at 2:26 AM No comments: Links to this post 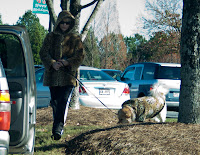 Why do I do these things? I could give you an explanation that involves public forums and photography rights but that's all stupid. I do this because it is thrilling to capture nonsense at it's best. For instance, lets say I'm driving around the parking lot of Target and I happen to come across a lady who not only rocks a leopard fur coat, but also pimps out her dog in the same attire.

Damn straight I'm gonna take you picture. If you decide to wear an elephant print sweater and hot pink pants or something along those lines, I'll be waiting. I will lurk and cloak myself in the shadows. I will poise ready to pounce! I will focus and adjust my shutter speed in anticipation for something like this.

And I dedicate it all to you. My readers. My faithful awesome lovely sexy readers.

Have a good week ya'll.

And don't forget your cameras.
Posted by Graham at 7:16 AM No comments: Links to this post

Greatest People in the World